Playing from the Spot

This is our fifth post in the Possession Series here. This is a follow on from our Escaping Pressure installment.

Playing from the spot refers to the concept of killing the ball at your feet, then playing the ball from that location. It is an extremely simple concept to understand but very unintuitive from a players standpoint to execute during a game.

For example, generally a player receiving the ball will always take a first touch a couple yards up field. Generally there is a defending opponent within ten yards that immediately starts to close on that location towards the ball. Your player just helped the defender by removing a few yards of distance, and now just has a split second to play the ball before the opponent arrives. This often results in a frantic attempt to juke the defender or an errant pass, resulting in losing possession.

Wouldn’t it be better for your player who receives the ball with ten yards free around her to kill the ball and force the defender to close that gap? That gives your player another half second at least to make a decision.

You can create a visual of this during practice by just illustrating the difference in the two approaches above (playing from the spot vs taking the first touch toward opposition). Just show them the difference in how much time they’ll have to play the ball. Having explained it to them, you can also be assured that NONE of them will change their behavior one iota. I recommend a homework assignment: Have them each watch the first 10 minutes of any professional game on YouTube, even better if you assign a specific game. Have them count how many plays from the spot there are in that ten minutes (one touches count as playing from the spot). You can split them into two groups and have half count one team, and half count the other. Now that they’ve done that, have them compare that to the first 10 minutes of game video from your own team (if you can get it) or have them show up early to their next match and count from the game before theirs. The difference will be staggering.

After getting the players conscience of playing from the spot, you’ll spend the rest of your coaching “career” with them fighting their urge to go full throttle towards opposition. The battle will never end, you must be diligent about incorporating this into all your practices, calling out great examples, and calling out times when they forget.

Up to this point, this Progression series has been all about getting players comfortable with pressure and able to buy time until a passing option appears. Without that comfort, they won’t have the fortitude to play from the spot. So as those complementary skills increase, so will their capacity to play from the spot.

This is the first skill in this series that requires teammates (instead of just opposition) to practice. There are limitless drills online about how to practice it, but this below is the simplest distillation of the skill I can come up with. As players improve you’ll build in lots of variation.

One mantra I encourage you to adopt and keep repeating to your players: “It takes more than one opponent to take the ball from us!” This will help them mentally prepare for being comfortable holding the ball 1v1 which enables the ability to play from the spot under pressure.

Start with a grid of 10×10 squares, 3 players per square. The game is simply keep away, with the player responsible for losing the ball becoming the defender. The player with the ball is not allowed to dribble, they MUST play from the spot. They are allowed/encouraged to turn with the ball and shield it from the defender until their teammate gets open. If they dribble the ball it is considered a turnover. With only a 2v1 scenario, often there will not be an immediate passing option, that’s fine. This is encouraging both playing from the spot, shielding the ball, and receiving with the proper foot. Emphasize all 3 coaching points, all drills should be compound in nature. We will come back to similar activities where the focus will be on the players without the ball, but we haven’t gotten that far in our possession series, so we focus on what we’ve already taught them.

Combine two groups/squares so that you have 4v2. If you have odd players out, move to a 5v2 or you can have 2 players rotating in/out and focusing on 1v1 scenarios from earlier articles in this series.

Start with a 20×20. 5v2. The objective now is for the players with the ball to move as a unit back and forth across the zone to “score”. Again, all players must play from the spot, now we are adding a directional objective. Once a player receives the ball outside the square, they have scored and now must work the ball to the opposite end of the square. After a certain number of scores you have players rotate into the middle. You can add variations involving numbers of passes that must be completed to score, putting a max time any player can sit on the ball, or put a 1,2,3 touch maximum on each player etc. You can reduce or increase ratio of players to increase/decrease difficulty. You will also want to work in the concept of playing to space at some point as well. 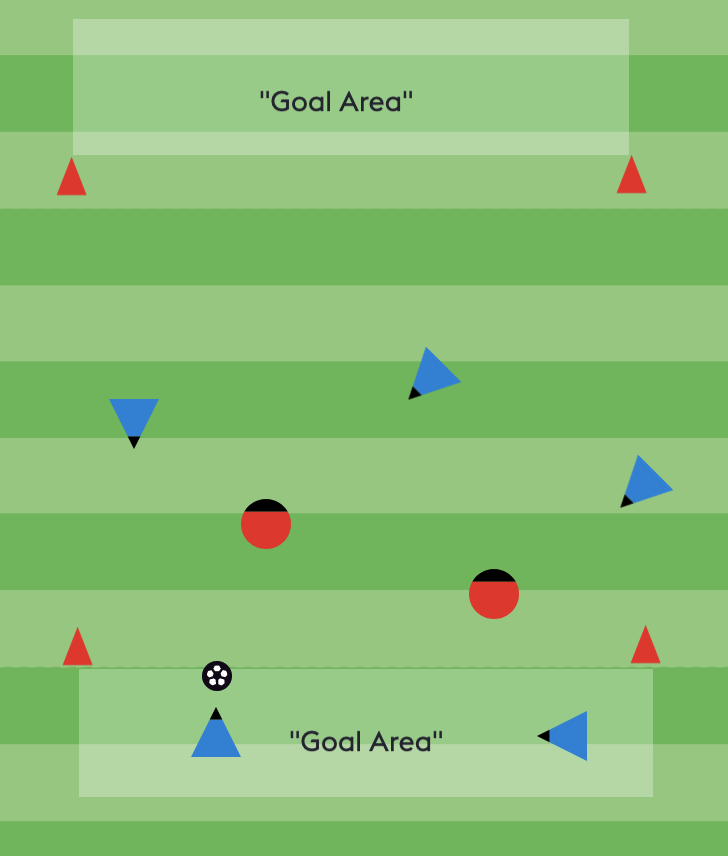 This is an excellent lead in session to our next session which will focus on instruction to players on their Movement Off Ball.