Play the Way You Face

This is our tenth post in the Possession Series here. This is a follow on from our Scanning the Field installment.

Playing the way you face is one of those topics that is very counterintuitive to younger players. For the most part of their soccer experience everyone has been teaching them (inadvertently at least) that the path to glory is towards the opponents goal. So the player instinctively will always turn with the ball to prepare an advance in that direction.

The issue here of course is that 50% of time, an opponent will be standing right there as soon as your player turns with the ball. The opponent immediately goes in for the tackle and will oftentimes come out on top. That means that every time your team turns with the ball they only have a 25% chance of escaping that pressure and advancing the ball. Hence why in youth soccer turnovers occur on average every 5 seconds.

Players need to learn that the best path forward for the TEAM is often a lateral or back pass. And they need to learn the importance of evaluating the situation before they turn with the ball. Because they don’t naturally understand how dangerous it is to turn under pressure, you’ll need to spend a lot of time demonstrating this first.

If you’ll recall the Escape Tunnel drill from Escaping Pressure, this provides an excellent progression option you can add to focus on this.

In Escape Tunnel, the player receiving the ball must determine a way to get through one of the open gates. Up to this point they have always had a player immediately on their back to deal with. Now you can change it up and instruct the defender to not chase the receiver half the time. This forces the receiver to be mindful of the fact that sometimes they can turn immediately and advance, other times they’ll need to shield the ball.

Another progression involves the player’s teammates. Get them involved by helping the receiver know when they can turn. Have the teammates not in the drill yell “turn” or “man on” to signal the receiver if they have time or not.

I use a variation of this to teach many different skills, but in the case you’re going to use this activity to demonstrate just how dangerous it is to turn under pressure. 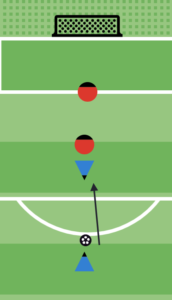 The first time I run through this, I always ask for a volunteer who thinks they’re great at scoring, they start as the 2nd attacker. I then let all the other players watch as we demonstrate. Assuming you have a basically capable defender and keeper, your forward should score maybe 1 out of every ten times. I ask the forward to reset and keep playing this activity through 4-5 times. When complete, ask them how hard is that to score 1v1 vs a defender, which is one of the easier positions to score from. Usually they’ll admit it’s pretty hard.

Then I’ll ask them to do something different, I want them to play the way they face and use their teammate. I have them layoff a pass then get open. So the activity then looks like: 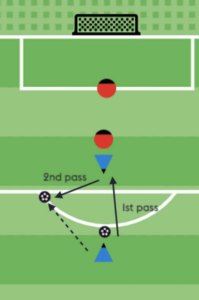 Explain that what you just did was take a 1v1 scenario and turn it into a 2v1 scenario because now the rear player is advancing the ball for you and the other attacker can peel off and get open to receive an easy through ball.

You can add a lot of variation once they get the basic process down. I like to have teammates who are waiting for their turn serve the ball from a different angle. You can also remove the keeper if this is still a challenge for younger players. I also like to add a 2nd defender that is stationed some distance away from the attack. If they attackers take too long to execute, the 2nd defender will reach the action just in time to break up the through ball. Make sure you vary the starting position of the defender, perhaps have once out ever few plays the defender play off so the opportunity to turn is actually the best option.