This is our eighth post in the Possession Series here. This is a follow on from our Width and Spacing installment.

Back in Movement Off Ball our focus was on getting players moving to space to support the ball carrier. As your players get better this you can start to sprinkle in some more specific advice on the better use of angles to provide support.

It’s one thing for a player to get into space to receive the ball, but if the opponent is organized on defense, they are providing good compactness which is closing down space for your ball carrier to exploit. So being in space may not be enough to be available, your off-ball players need to be actively aware of and trying to find a passing seam (or lane). A seam/lane is simply space between opponents where a pass can safely be made.

In the diagram below, your team (represented by triangles) has the ball. There are two opponents blocking the ability for your player with the ball to pass to either teammate. The solid arrows represent the available passing lanes. The dotted lines are where your ball carrier’s teammates can move to receive a pass through either available seam. 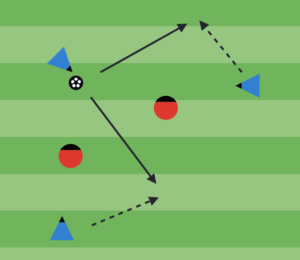 Safe Angles – Players instinctually do not want to run any more than is necessary to complete an objective. When their objective is to get into a seam, oftentimes they will stop short of providing safe angles in favor of just a visible angle. The figure below shows a teammate giving an unsafe angle. Players must be taught (shown how) to provide a safe angle that a defender cannot stop with a simple stab of the leg.

Realistic Angles – Players must be shown what constitutes a realistic angle. Oftentimes you’ll see a teammate get open completely outside the ball carrier’s field of vision. Teammates must recognize the difference of a ball carrier being in open space versus under pressure when they are unable to turn. Teammates need to be shown the difference it makes to be a seam that is visible and usable by the ball carrier vs one that can’t be played because of pressure. 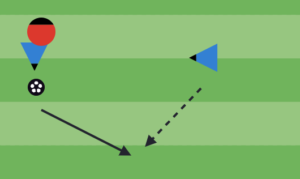 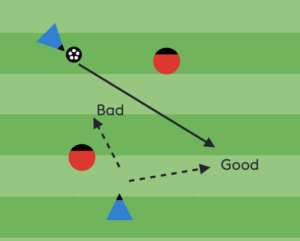 During your possession exercises, consider rewarding passes that split defenders double what you reward others to encourage this thinking.

Don’t call for a bad ball; don’t pass a bad ball – There are two sides of this coaching point, one for ball carriers and one for teammates. Ball carriers should never play a bad option presented by a teammate. If the teammate won’t get in the proper position, it’s the ball carrier’s responsibility to put the pass using the good seam or angle and forcing that teammate into the proper space. Conversely, players just want the ball, and they’ll call for it even if the angle isn’t great. You need to actively call out players that signal availability in poor situations. One way to do this is during your keep away / rondo exercises that either of these infractions leads to the turnover. Meaning, if a teammate calls for the ball while not in a good position, that’s the same thing as a turnover and that player must go into the middle.

Like Keep Away, this is very basic progression that will start simple but ultimately can be as challenging and dynamic as you make it. You can adapt the player counts and grid sizing to accomodate your age group.

Start with a grid of 10×10 squares. Each square starts with four players, one on each corner. Player A starts with the ball and passes counter clockwise to Player B, who players it counter clockwise to Player C, then C to D, etc around and around. The restriction is that players can only take two touches, the first touch must be with their right foot. 2nd touch is the pass, either foot. 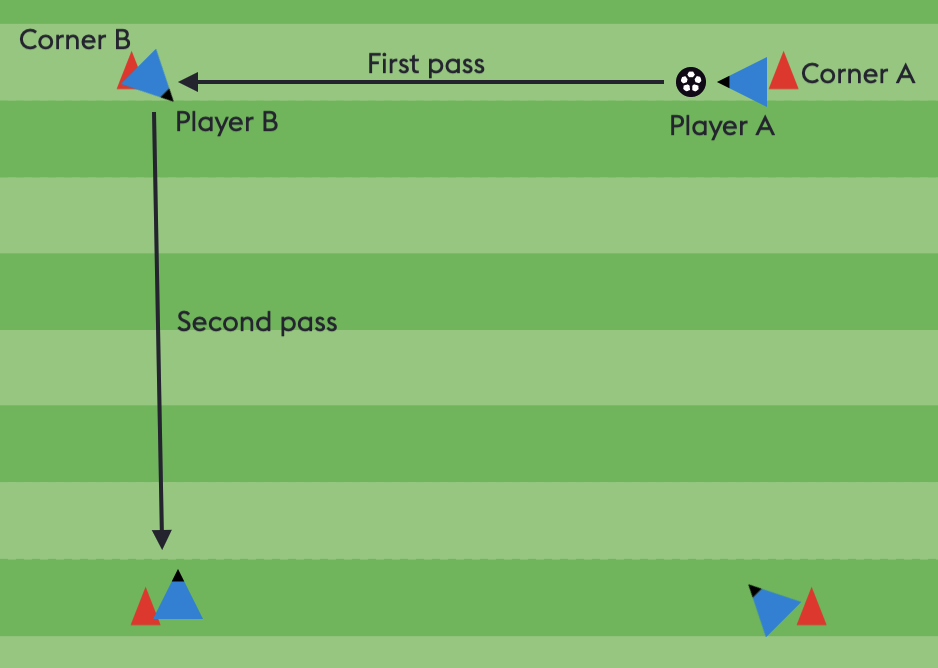 After the ball has made 10 rounds or so, switch direction. Now each first touch must be with the left foot.

This 1st phase is getting them comfortable opening up and receiving the ball across their standing leg while getting them used to immediately changing direction.

You can add a fun/competitive element by having players count and call out successful passes. You can see which square gets the most passes in a set time or play first to a certain number.

Remove one player from each square. The exercise is the same except the ball is always played to the corner without the player. Player A starts with the ball without any player in Corner B. Player B is standing in Corner C. Player B takes off towards Corner B. When Player B is half way to Corner B, Player A plays the ball to Corner B such that the ball arrives just as Player B does. Player B has the two touch limitation with the right foot receiving first, then must play to the open corner timing is so that Player C arrives at the same time. Around it goes, then again you’ll switch the direction at some point. 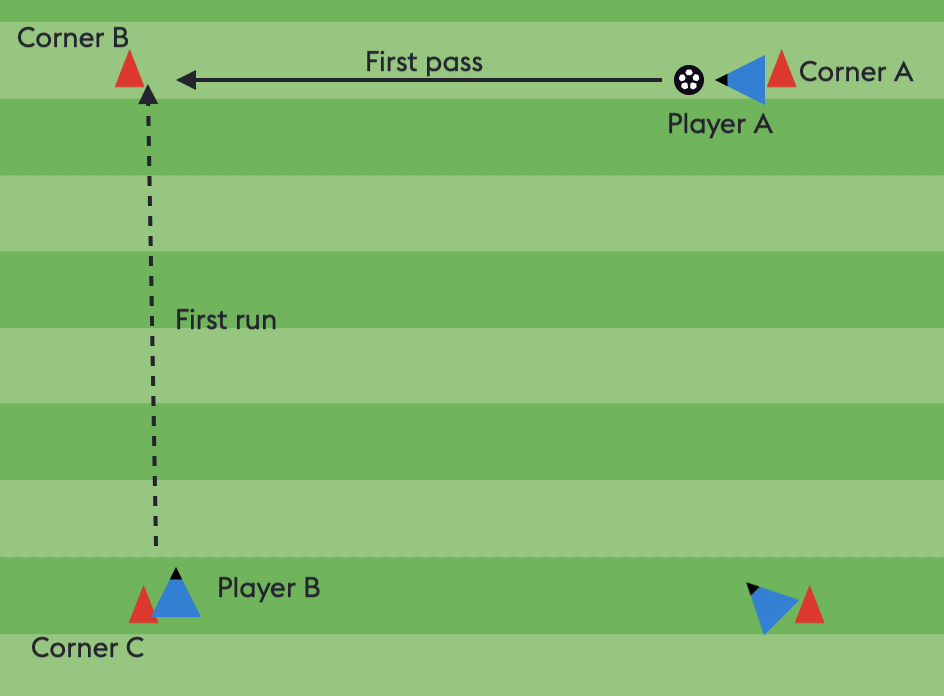 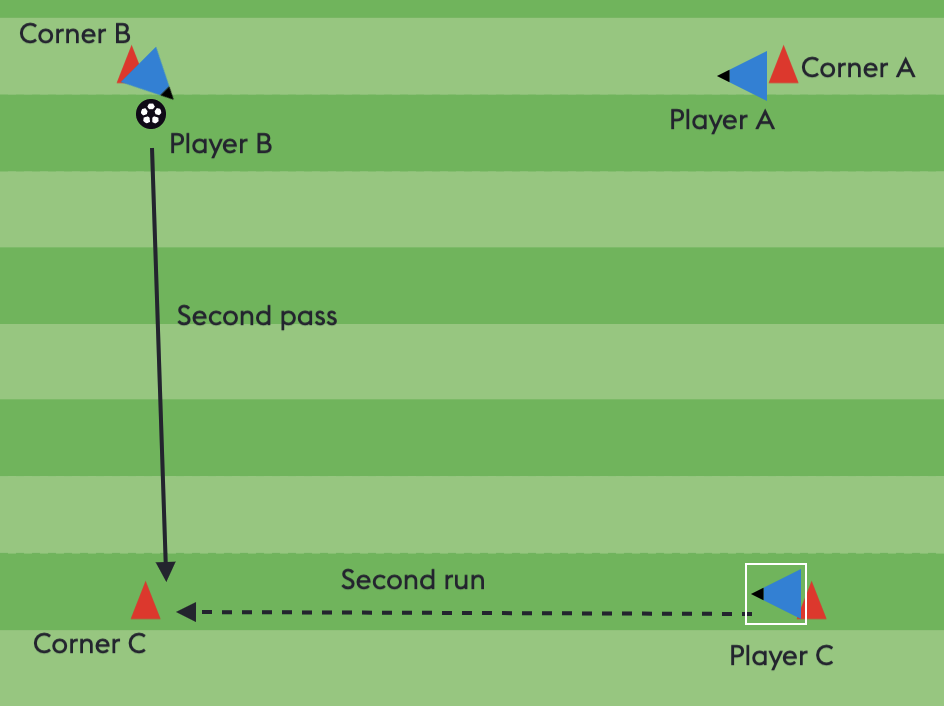 This is more difficult because players now have to consider the timing of the pass and they must execute their two-touch maneuver at full speed. The two things to watch for will be players 1) playing the ball too early or 2) (which is much more common) balls played late. This happens either because the passer waited too long or the runner went too early before the passer took a 1st touch.

Now we add a defender in the middle making this a keep away style activity. Players must stay on their square and move to the open corner to support their teammate. You can add touch restrictions, and 3 second pass rule, etc to increase the level of difficulty. 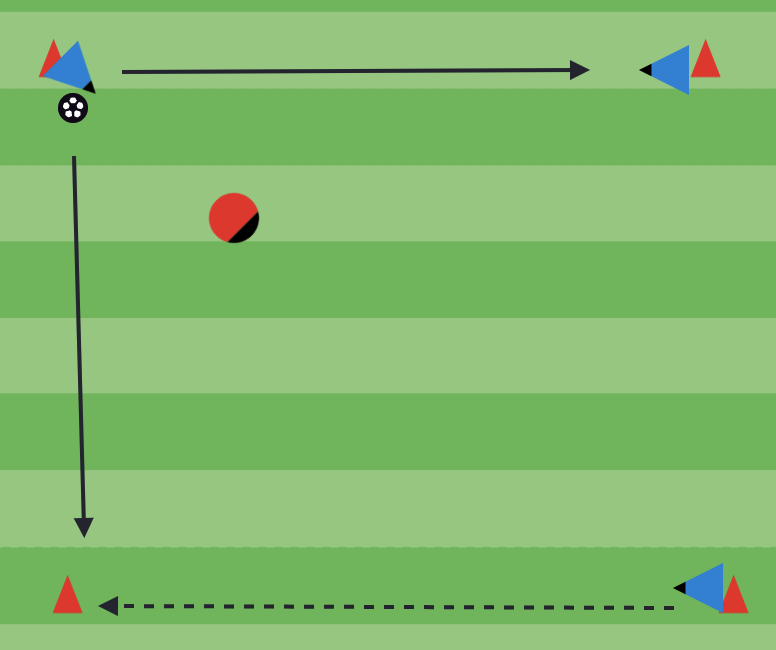 This progression overlaps with your keep away progression. Same rules as before.

There are 3 teams per square, each team with different color pinnies. It’s two teams versus one team in keep away. When a player loses the ball, their team is now in the middle. This is a fast-paced game and turnovers can be very quick and thus taxing for players to keep track of their team. It gets easier for them after they’ve played it for a while.

To keep score, every successful completed pass is a score for BOTH teams (passer and receiver). Each team is responsible for tracking their own points. The first team to 31 (or any arbitrary score) is the winner.

Next up is getting players to use this knowledge in combination with understanding balance and mobility by Scanning the Field.